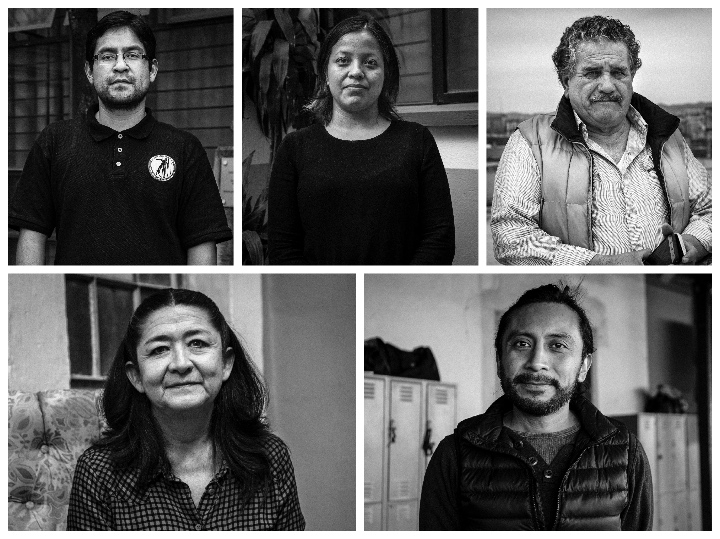 Each day, human rights defenders speak out for the rights of others. And each day they risk their livelihoods, their liberty and in many cases their lives. As attacks, abductions, and assassinations increase in Latin America, we shine a light on the extraordinary human rights defenders taking a stand against injustice: community leaders fighting to protect collective land rights against mining companies; women struggling for gender equality; human rights lawyers risking their own safety to defend the rights of activists. Peace Brigades International have just launched an online platform 'The Defenders', sharing the experiences of those fighting for justice on the front line. Here in the first article in the series we focus on Mexico and just a few of those brave people, whose stories of resilience, hope and solidarity that need to be heard.

"If the politicians we put in power don't want to help, we do. And we will do it"

Alberto Xicoténcat is the Director of the Saltillo Migrant Shelter, Mexico. Since 2002, the Casa del Migrante de Saltillo has been fighting for the human rights of migrants who are transiting through Mexico. The humanitarian support that the Casa del Migrante de Saltillo provides to migrants includes medical and psychological care for those who need it, as well as legal assistance helping individuals with the migratory process and in deportation cases.

As a result, the Casa del Migrante de Saltillo has received extensive recognition for its work, for example having been awarded the Lettelier-Moffitt Human Rights Award by the Institute for Policy Studies.

"You learn to survive in prison.  It does not take away your dreams or who you are.  You have to face up to who you are but above all you have to live with dignity in a situation that denies your dignity. You meet bad people, but prison is simply a reflection of an unjust society. These are the same people you live with on the street, and it's because of the unjust system that exists in the country."  Antonio Cerezo

Antonio Cerezo is a human rights defender dedicated to political prisoners’ rights in Mexico.  He was criminalised and imprisoned because of his human rights activities and he was freed from prison after completing his sentence. His resilience helped him to use his time in prison to support those imprisoned and to campaign about prison conditions. Today he continues fighting for human rights

Following the detention of their brothers Alejandro, Héctor and Antonio in August 2001, Francisco and Emiliana Cerezo Contreras formed the Cerezo Committee to campaign for their release. They have been victims of various episodes of harassment and threats, and PBI has accompanied them and other members of the Cerezo Committee since February 2002. The Committee continues to work for the rights of political prisoners in Mexico. Its work includes documenting the cases of human rights defenders criminalised and imprisoned because of their human rights activities, supporting those imprisoned, campaigning on prison conditions and running human rights and security workshops for human rights defenders and organisations

"The government will change because they have to understand that we exist because they have not done their job. The day they do it correctly we will have no reason to exist. But many of the policies exist because we have pushed for them. Us all over the country, huge number of organizations, activists, Human Rights Defenders of all kinds"

Gabino Gomez fights for women' rights in Chihuahua, Mexico. Despite the trauma of four women in his family being brutally killed, Gambino continues to strive for the protection of human rights. We owe a lot to defenders like Gabino, the least we can do is stand in solidarity and support them in their vital work.

"There is no other way to live in this world than loving Mother Earth, respecting each other and collaborating collectively.  This view of how we build our lives collectively is so important because we are not alone in the world, we are here together."

Sylvia Villaseñor works for the Mexican Institute for Community Development.  She is involved in defending indigenous land rights in Puebla, Mexico.  Mining and hydroelectric companies, sanctioned by the government are appropriating indigenous lands and threatening the lives of the communities.

"When you have a link to the land and the water, it hurts you that they want to destroy it.  Here in Mexico we all have indigenous roots whatever the colour of our skin.  I lived several years in an indigenous community and you learn the values and the riches of the original cultures."

"What keeps me here in Guerrero is the possibility of making a difference, however small and that’s why I continue as a human rights worker. We work as a team. The people we work for, Like Valentina are my hope, my motive. The work of a human rights defender is hard and without their example, I wouldn’t continue. Their example and the possibility of supporting them is what makes me continue here"

Sandra Alarcón is a 25 year old human rights lawyer, working for the Human Rights Centre of Montaña de Tlachinolan, in the state of Guerrero. Mexico. The Centre supports anybody who has suffered human right abuses in Guerrero, particularly from indigenous communities. Guerrero is a complex state with high levels of violence. Organised crime has a strong presence. The dirty drugs war and the resulting militarisation, has led to more human rights violations. Rates of violence against women are exceptionally high and impunity is a historic problem.

If you too are moved by their struggle and want to do something about it, can buy a ticket for our raffle of an exclusive Picasso linocut! By entering to win, your donation helps defenders receive the life-saving tools and support they need, and helps to ensure they're not alone in their struggle. Thanks to a generous donor, for every £25 ticket sold PBI UK will receive £50. Please give generously. https://www.peoplesfundraising.com/raffle/picasso-for-pbi

This article was originally posted in Latino Life magazine. Read it in full here.